The Lord of the Rings Animated Wiki
Register
Don't have an account?
Sign In
Advertisement
in: The Hobbit, Characters, Deceased, Villains

Who are these miserable persons?

--The Great Goblin, on Bilbo and the Dwarves

The Great Goblin was the leader of The goblins and Leader of Goblin town. He only appeared in The Hobbit (Animated).

Unlike the other goblins, the Great Goblin doesn't have large, cattle-like horns, but has a small rhino-like horn in the centre of his forehead instead.

The Great Goblin had ruled his mountain for a long time, until Bilbo Baggins and thirteen Dwarves were captured and taken to his lair. He questioned them and Thorin truthfully told him they didn't mean to trespass. However when he saw they were carrying the sword Orcrist he tried to kill Thorin. The Wizard Gandalf arrived and saved the companions, killing the Great Goblin with the sword Glamdring and many others at the same time.

the Great Goblin was easily angered and not very smart, relying on others to serve him and to do his bidding.

The Great Goblin was lazy and rather fat and had a very large head for his body. His raspy voice was rather higher pitched than it would seem from looking at him. 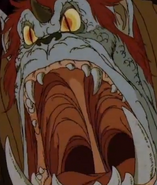 The Great Goblin in a scream of rage 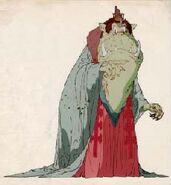 The Great Goblin
Community content is available under CC-BY-SA unless otherwise noted.
Advertisement