The Lord of the Rings Animated Wiki
Register
Don't have an account?
Sign In
Advertisement
in: Hobbits, Characters, Alive,
and 6 more

Bilbo Baggins was a Hobbit and the uncle of Frodo Baggins.

Gandalf and the Dwarves[]

Bilbo's adventures started early one morning when he stepped outside his home for a smoke. All of a sudden the Wizard Gandalf appeared. Shortly thereafter, 13 Dwarves followed. They needed a burglar in their quest and Bilbo was chosen. The leader of the band, Thorin Oakenshield, told Bilbo their story.

Long ago, Dwarves and Men owned Lonely Mountain and all the riches inside, for Dwarves were the greatest of craftsmen. But then the Dragon Smaug came. He wanted the Dwarves' treasure, so he attacked them, killing them all with his Fiery breath. Thorin was the last descendant of the Dwarf King so he considered "Smaug's" treasure rightfully his.

After hearing the Dwarves' story, Bilbo signed a contract to assist them and the next day they set out on their journey.

At one point, when Gandalf was absent, they were captured by Trolls. But the Wizard arrived to rescue them and they took weapons stolen from others by the Trolls. It was in this way that Bilbo acquired Sting.

The group was also captured by Goblins at one point and taken to their leader, the The Great Goblin. Again, they were rescued by Gandalf, but in their haste to escape Bilbo was separated from the group. he fell down a tunnel into the lair of the creature Gollum. In looking around, Bilbo noticed a shiny ring on the ground. he put it his pocket, a souvenir of the journey.

He was then discovered by Gollum, who wondered aloud how the Hobbit would taste. However, Bilbo held up his sword and warned him to back off. Bilbo asked Gollum the way out and Gollum replied by challenging him to a riddle game. His rules were that if he won, he would eat Bilbo, but if Bilbo won Gollum would how him the way out. The game lasted a long time and it ended when Bilbo asked Gollum what he had in his pocket. Gollum did not know that his precious Ring had been found by the Hobbit. He told Bilbo to wait while he got something: unknown to Bilbo, Gollum intended to wear the Ring, which gave invisibility, and then kill and eat Bilbo. He was unaware that his Ring lay in the pocket of the Hobbit he had just left. Bilbo, meanwhile, tried on the Ring and found, to his delighted surprise, that it gave invisibility. He suddenly heard Gollum shrieking curses at him, saying something about the "Precious". As Bilbo watched, Gollum reasoned out loud that the Hobbit must know the way out because he had known the way in. Gollum sped off to the back exit, followed closely by Bilbo who, when he saw the doorway, jumped over Gollum with a mock farewell and ran off, leaving Gollum to shriek his curses worse than ever.

Bilbo met up with the Dwarves and they, along with Gandalf, fled the mountain while the Goblins, deprived of their leader, gave pursuit. The group climbed up trees and believed themselves to to be safe. However, the Goblins set fire to the trees and they were only just rescued by giant Eagles, who were indebted to Gandalf. Gandalf then had to go, leaving them to continue the journey alone. Bilbo first rescued his companions from the mandibles of giant spiders and then from the Wood Elves' prison until finally they reached their destination: Lonely Mountain. As the Burglar, Bilbo was chosen to go in first. He put on the Ring and slipped inside. Smaug couldn't see Bilbo but he could smell him. Bilbo had a conversation with the Dragon and tricked the latter into revealing the one vulnerable spot on his armored body. He then took one of the many valuables in Smaug's cave, pulled of the Ring, thus revealing himself, and ran.

Smaug blew fire after him and when Bilbo came out of the tunnel, his companions had to extinguish him. Smaug roared out of his cave and, believing Bilbo was from the nearby Man village, attacked it. Bilbo saw to it that Bard, the chief archer, knew where Smaug's weakness was. Bard shot the Dragon and sent him tumbling out of the sky and into the ocean, where he died. Thorin sent a message to his relatives far away that he had the gold.

Weeks later, the companions' enjoyment of their riches was interrupted when Bard and his men demanded a portion of the gold for killing the Dragon. An army of Wood elves too, demanded a stake. Bilbo said he would be glad to share the gold with them, but Thorin was stubborn. He refused, and the Men and Elves promised there waould be war. Bilbo confronted Thorin, who called him a "coward" who "knew nothing of war". Thorin's relatives then arrived, the dwarves' army. But then the Goblins came roaring over the hill and the armies of Men, Dwarves and Elves banded together to fight them. And all the while Bilbo sat on a rock and watched, not understanding this strange business known as war. The Goblins were too strong for the alliance, but just as they were about to be overrun, a new army came: the army of the Eagles, at which Bilbo commented, "Five armies now!? Mr. Bilbo Baggins, enough is enough!"

After the battle, which claimed the lives of six of his companions, Thorin, on his deathbed, called for Bilbo. He apologized for the things he had said before he died.

Bilbo, although he had a stake in 1/14 of the dwarves' gold, took only a small amount but still returned to The Shire a very rich Hobbit. It is known that Bilbo lived at least to 129 years old. He then left Middle-Earth for the Elf land The Grey Havens.

Bilbo was easygoing, content and a good cook. Unlike most Hobbits, he had a secret desire for adventure. He was smart and wished others well. Often when asked to do something, he couldn't refuse.

Bilbo had curly red hair, a round face and nose and brown eyes. he often wore a green coat.

Bilbo holding the One Ring 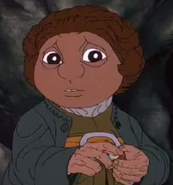